Your Office Is No Longer About Productivity

Transcend is about company culture being reflected and grown through office space.  We’re also about solving the problem of making employees more productive in the office space.

However, with the shifts in 2020, the majority of in-person businesses have gone remote or partially remote. And while the primary reason for requiring an employee’s presence in the office may have been to keep people on-track, many have proven to be just as productive from home.

So, myth busted. The office is not the epicenter of productivity and it doesn’t need to be. So why have an office space? Why not go fully virtual?

What we’re hearing and reading from industry experts is that the office doesn’t stand for what it used to, but it’s still critical for any business to thrive over the long term.

We’re finding that three key components are essential to your business’ health. They are culture, creativity, and connection.

It cannot be grown virtually. It can be maintained for a certain period of time, but to truly grow and improve culture it must be done in person.

A 2015 Stanford study of 500 employees over two years showed that working remotely increased total-factor productivity by between 20 and 30 percent, which is great!  But what was exchanged for an additional hour a day of focused work?

Author Alfie Cohn backs up the idea when he says in his book Punished By Rewards, “People will typically be more enthusiastic where they feel a sense of belonging and see themselves as part of a community than they will in a workplace in which each person is left to his own devices.”

Even for Bryan Miles, for founder of the virtual assistant company Belay Solutions, culture happens in person. He noted on a podcast with Kary Niewolf that being together face to face still matters. You don’t want people to feel isolated. Bryan’s virtual team still gathers a few times a year for summits and casual family days to remind everyone of the vision and mission of the business – and have some fun together.

We know from the last six months of forced experience that it’s much easier for teams to fall into silence and disconnect when they’re remote. While the culture may become one of results, it will not become a culture of collaborative thinking or valued teamwork.

JLL Executive Vice President Brooke Dewey said in a recent interview that, “Office space will continue to be an integral part of defining company culture and brand image.”

We’re seeing the desire for a “homebase” still exists for established and on-the-rise brands in the continued build outs of major office projects in Atlanta – notably Star Metals, 8West, The Interlock and Atlantic Yards.

Recently we shared an update on big brands coming to our city and building out office space which includes Rooms2Go and Amazon.

As we’ve seen through the last six months, productivity is at high levels, but creativity wanes.

A 2017 HBR article notes, “A creative work life requires social relationships and serendipitous interactions. It requires contending with ideas you don’t agree with. It requires getting up and moving around. As a result, it’s becoming increasingly clear that for many people, working at an office isn’t a relic of a pre-digital age, but a vital element in reaching their creative potential.”

While remote work has been necessary to protect the health of employees, it doesn’t give people the opportunity for process improvement and innovation that they have when they are in the same physical space.

The physical activity of being in and walking around an office space can lead to greater creative capacity as well. Psychologists chalk it up to the ability to create temporal and spatial distance for ourselves: physical and temporal breaks that allow our minds to attack problems in new ways. Think about the ideas that are often formed in the shower or in the car commuting to work.

This temporal and spatial distance also gives us the ability to remove ourselves from isolation throughout the day which is shown to make us happier and more satisfied with our jobs as we increase our social connections.

Humans need personal connection but virtual connection is very draining and unnatural to our human wiring to maintain.

An April 2020 article from Psychology Today cited, “Virtual work introduces an unconscious bias, known as a “distance bias,” where we prize what’s closer in time or space more than that which is farther away. This manifests itself in us placing a higher value on things that are physically close to us. The physical construction of our workspaces are often efficient at creating accidental interactions.”

This easily perceived distance is why office space going forward will place a priority on ways that employees can connect with one another–whether that is how desks are arranged or a ritual in the break room where people come together for a happy hour on Fridays.  Human to human connection is what keeps companies thriving for the long-term.

Steve Jobs was a huge proponent of this idea. He said, “If a building doesn’t encourage [collaboration], you’ll lose a lot of innovation and the magic that’s sparked by serendipity. So we designed the building to make people get out of their offices and mingle in the central atrium with people they might not otherwise see.” 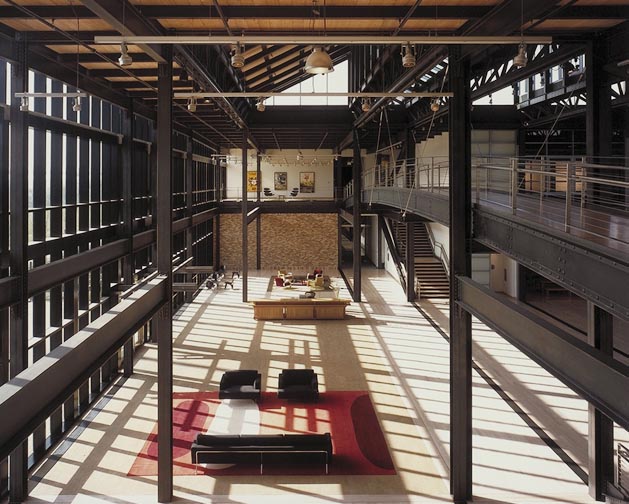 The Pixar atrium houses a reception, employee mailboxes, cafe, foosball, fitness center, two 40-seat viewing rooms, and a large theater – and was planned by Jobs to house the campus’ only restrooms. The idea was that people who naturally isolate themselves would be forced to have great conversations, even if that took place while washing their hands.

Today, they do have more than one restroom, but the idea behind it was important even in recent renovations. The accidental interaction idea has been carried out with smaller collaborative areas that join pods of people in different areas of their office.

HBR research echoed this idea. It has shown that if you want to increase your engagement and performance at work, there’s one thing to do that trumps almost everything else: make a close friend at the office.

People with a best friend in the workplace are seven times as likely to report being engaged in their work. Likewise, people with at least three vital friends at work are 96% more likely to be satisfied with their lives.

But how do we achieve this through COVID and keep safety the priority? That’s the big question.

As employers think about returning teams to their offices or adapting a new space for the long-term, they should know they are supported by new shorter-term lease options, redrawn floor plans, more open-air spaces and larger common areas.

The pandemic debunked the myth that productivity was founded in the office, but it could trade valuable creative connections and the culture you represent.

We’re here to help re-imagine your office space. Learn more about how Transcend is helping the best in Atlanta bring culture, creativity and connection back to their office space.

Does your space reflect & inspire your company’s culture?